Vampire: The Masquerade – Swansong is one of those games from the popular paper role-playing franchise that attempts to breathe new life into the franchise. That’s why you probably see several projects around her. The publisher Nacon and Big Bad Wolf Studio took the opportunity to offer us a narrative game with RPG sauce. An area that the studio had already exploited brilliantly with The Council. Let’s see if they can do even better with the vampires.

Testing conditions: We completed the game twice on PC (16 GB of DDR4 3000MHz RAM, Radeon 6800 XT, and an AMD Ryzen 5 2600) knowing that this is a narrative game where multiple endings can be unlocked .

Boston is getting bad blood

Let’s start with some good news about the game that turns out to be very accessible to neophytes who wouldn’t know the paper role-playing game series. This narrative adventure, depicted through the journey of three protagonists, allows us to have a good overview of the “World of Darkness”. Having such a rich universe from the start actually gives a big advantage to Swansong, who can spread out his narration without having to make too heavy introductions.

We appreciate the fact of leaving us the possibility of opening the codex by pressing a simple key during a dialogue to quickly have the information necessary to understand a context, or just out of curiosity. It’s really very practical not to break the rhythm while searching in the menus.

Despite everything, we quickly understand the contours of this secret society of vampires divided into several clans who live alongside humans during the night. Despite differences, all respect a fundamental law, the Masquerade, which obliges all vampires to keep the secret of their species. The danger of the Masquerade is moreover one of the stakes of Vampire: The Masquerade – Swansongwhich begins its story after an attack during a party where two factions had to negotiate.

Not knowing what exactly is going on, the Prince of the Camarilla, namely the highest authority in the city of Boston, will send three century-old vampires to investigate on their side to find out more. Galeb, Leysha and Emem know each other, as the very beginning of the game indicates, but the connection between them is clearly not central to the plot. Everyone really has their own quest and a fairly rich background that we peel over the missions. Big Bad Wolf Studio has succeeded in this feat of not mixing everything up, while keeping a certain consistency since all their discoveries and the situations they experience are more or less linked in a big whole.

No need to worry about the side of the story, in which one immerses oneself easily. Investigations, betrayals, conspiracies, violence and various choices are the ingredients of this very tasty cocktail. Especially since the outcome is not set in stone since the title proposes 15 different endings for the main plot, 10 for NPCs and 6 for factions. 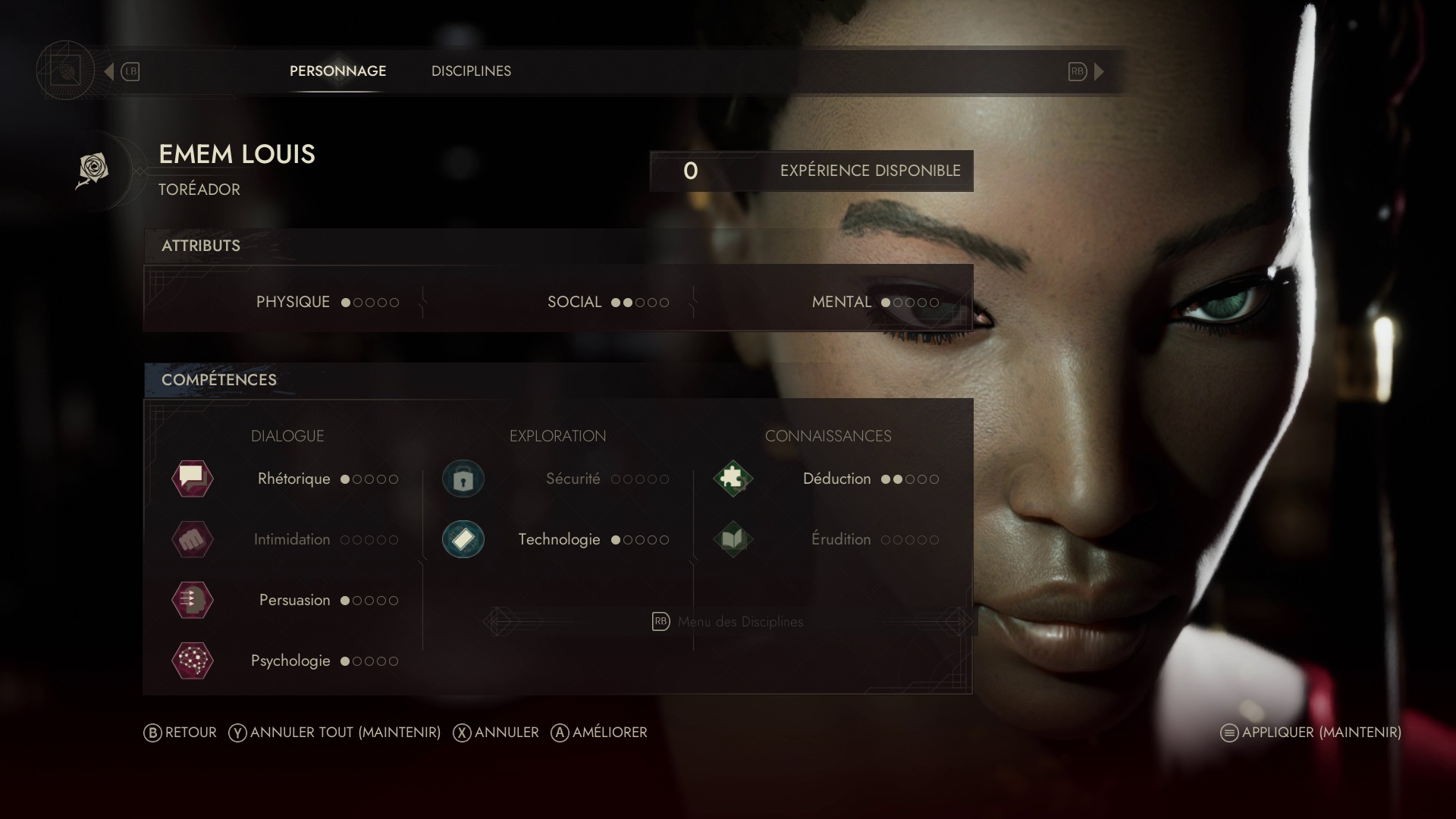 After the introduction to the Prince’s residence, you will have to chain the missions by choosing the character you want and in the order you want. Each of them is quite unique and corresponds not only to a part of the game in terms of gameplay and approach, but also in terms of lore since they come from different clans. However, their personality is not defined entirely by this trait.

We can see a different look in time when we get to know them. Caleb is the oldest vampire in town, he is cold and very devoted to the figure of the Prince. Leysha is a woman who wakes up after years of sleep due to a treatment that is supposed to cure her mental instability caused by a rare gift that allows her to have premonitions. Emem is someone who wants to live her immortality freely in the café-theatres that she runs and which are very popular. She doesn’t really care about court business.

We therefore have a Caleb very bound by a past which could eventually catch up with him, and which remains interesting for the player since it is a very old and therefore very erudite vampire, an Emem anchored in the present who will juggle between her personal desires and her obligations to the Camarilla, and Leysha who seeks to have a future with her daughter despite her condition.

Their profiles more or less reflect the gameplay, because in addition to the RPG aspect of the title which lets us create a character sheet in order to distribute the first characteristics (with predefined choices or freely), they have unique abilities. Leysha can for example make herself invisible and change her appearance by copying a uniform to infiltrate easily. Caleb plays more of a classic investigator role with his Ventrue abilities, while Emem is consistent with his open-mindedness and negotiating figure. She therefore has to interact with a lot of NPCs.

On the other hand, his unique power of haste, which allows him to reach distant places and slow down time, makes his missions the least interesting in terms of gameplay. The principle quickly becomes redundant and does not necessarily correspond to the image we have of it. The studio probably wanted not to make its phases too similar to the other two, but unfortunately it doesn’t work.

RPG in a Telltale formula 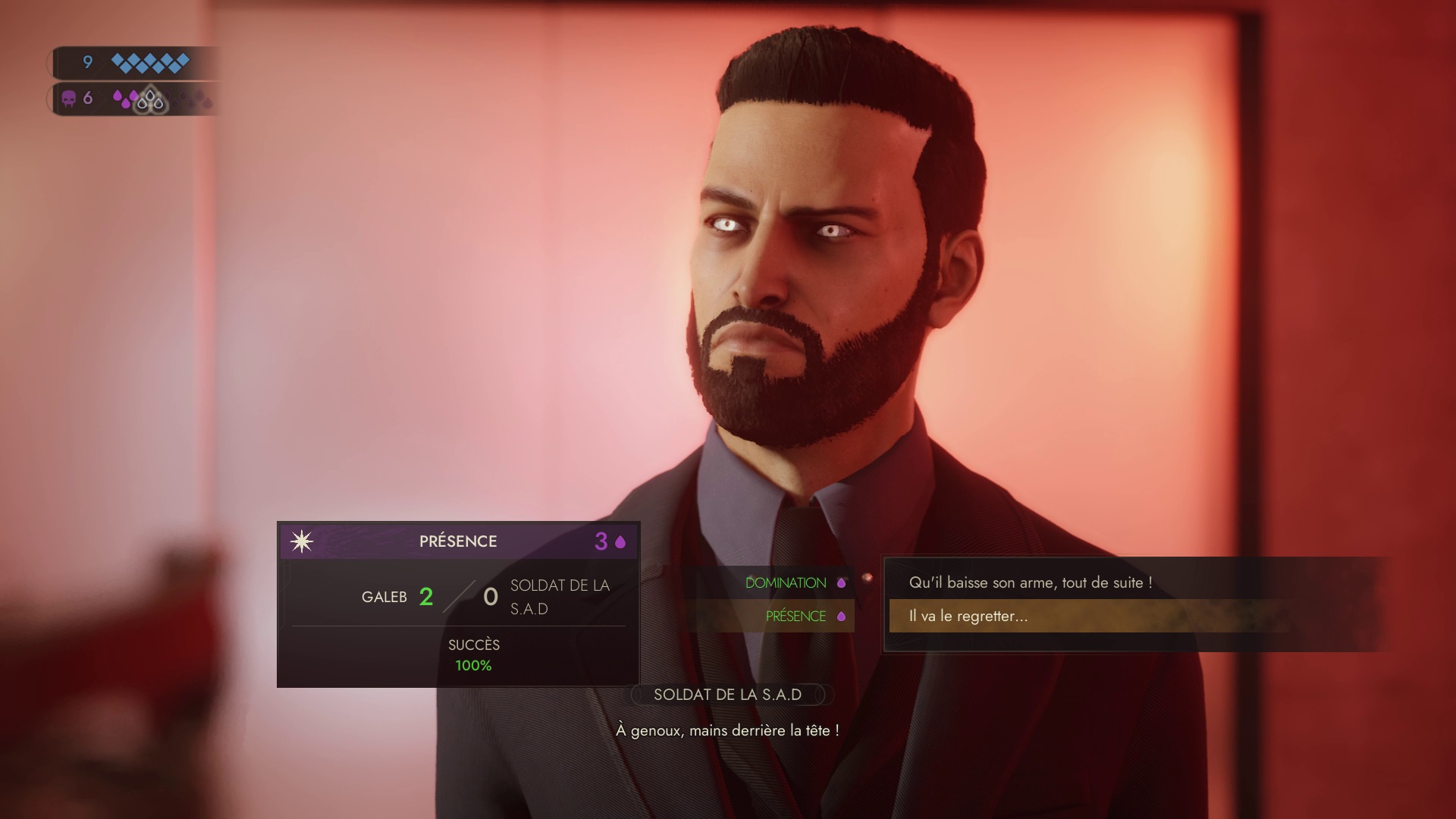 Fortunately, the main trunk is strong enough to keep us going. As we said, the characteristics chosen during the creation of the character sheet will open doors allowing you to solve the main mystery and collect valuable clues concerning ancillary cases. This means that others will be closed to you. Sometimes, it will be possible for you to obtain information via several means when those are not at all available because of your current statistics. Concretely, this translates for example in the dialogues where one can choose the rhetoric or the psychology to make speak an NPC. Or to open a door or unlock a computer via hacking if your technology points are high enough.

The NPCs also have their own sheet and they can sometimes defend themselves against your “attacks”.. In the event of a tie, a die is rolled to determine whether or not you win the verbal game. It’s sometimes a matter of luck, although a percentage still gives you an idea of ​​the most likely outcome. The paroxysm of this concept occurs when “confrontations” serving as dialectical battles where the right to make mistakes is limited.

Like any good RPG, your actions allow you to improve your characters between each investigation by spending EXP and gaining positive or negative traits. Our first game was a pure discovery and of course we go through a lot of mistakes. Despite the frustration at times, we easily accept the thing since the notion of choice really offers different and sometimes surprising situations. We also want to discover what we missed previously. Thus, the replayability remains quite satisfactory as demonstrated by our second part.

You also learn how to better manage your skills and the energy spent on them, as well as how to manage hunger. Because Galeb, Leysha and Emem also possess vampiric powers giving them the ability to dominate their opponent during dialogues, or to reveal things hidden in the background. Each use increases your hunger, which you can satisfy by taking NPCs to safe places discovered during your exploration.

Vampire: The Masquerade – Swansong involves the protection of the Masquerade through a gauge of suspicion shared by the three protagonists. When it fills up, it gives you significant penalties that will weigh down your entire game. If you kill an NPC while eating or if you cannot find certain sensitive documents, you will increase it. It may be bad faith on our part, but this gauge fills up a little too easily. 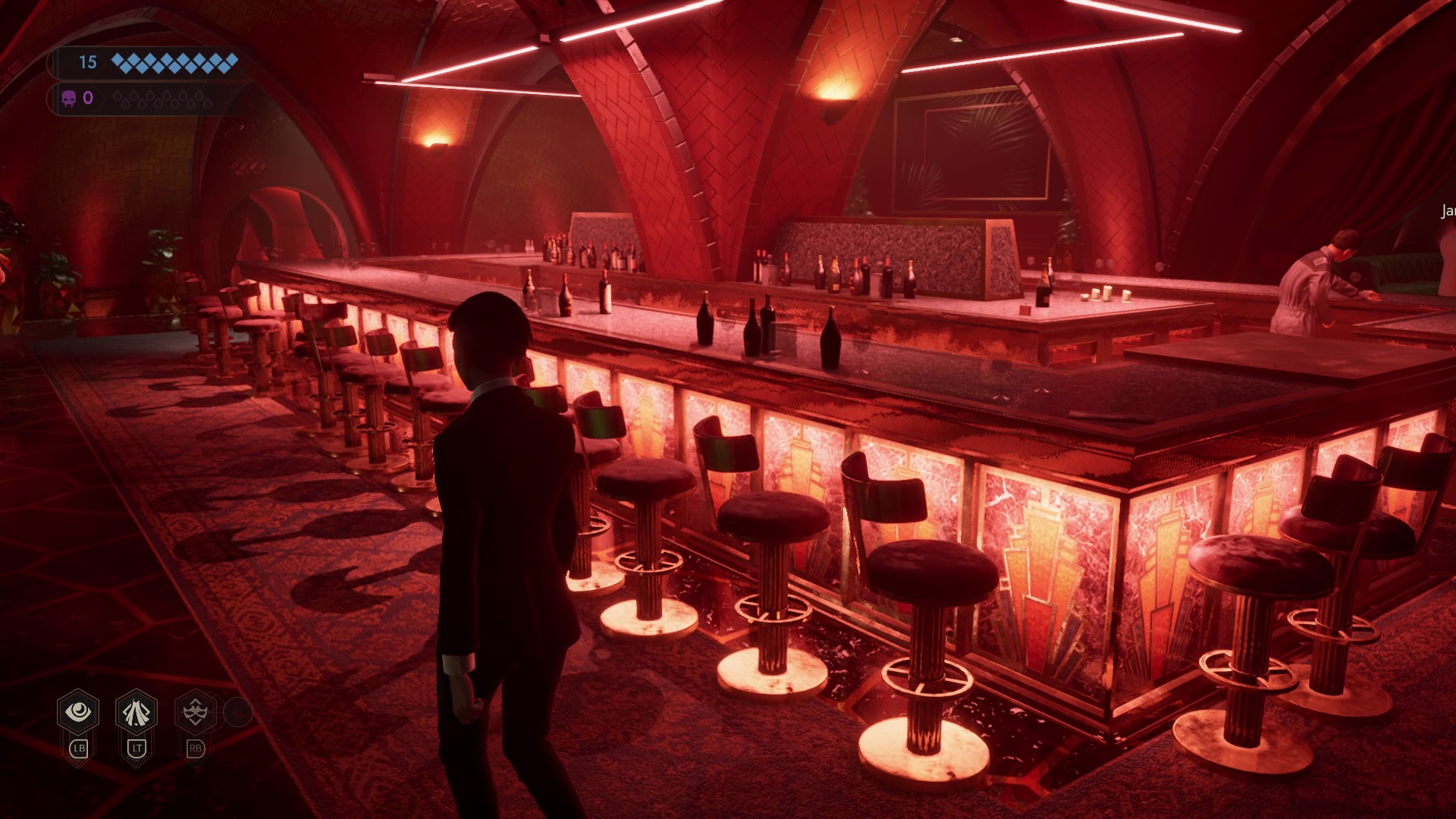 Overall, the title offers us a good dose of exploration and investigation. Apart from a few, each segment is very detailed and forces us to search in every nook and cranny, to cross-check information and sometimes to solve quite tricky puzzles. It’s one of those games where you have to take a few notes from time to time in order to get by, which is not displeasing to us. Count about fifteen hours to finish for the first time, and much more because you can easily start it again at least twice more to experience the biggest.

It also hasa very good English dubbing and striking music as Olivier Derivière knows how to do it so well (A Plague Tale: Innocence, Dying Light 2). We will not necessarily retain the atmospheres during our investigations, on the other hand the composer knows how to hit hard when it is necessary. We note in particular the threatening theme of Caleb or that of Leysha, very melancholic.

Vampire: The Masquerade – Swansong still lets its AA game status show through with rather dated facial expressions and animations. On the other hand, the decorations of the majority of the environments (in particular the interiors) force the respect so much they are detailed and filled with elements which make it possible not to facilitate the task too much, in order to immerse us at best in our research.