The Warriors won the NBA championship and Curry cried: Netizens posted blessings inspired by Cook and the spirit of the Warriors

Beijing time on the 17th,The 2021-22 NBA Finals came to an end. As the Golden State Warriors defeated the Boston Celtics 103:90 on the road, they successfully won the championship with a total score of 4:2. Win the O’Brien Cup again. The team’s star Curry won the FMVP (finals most valuable player).

Curry cried, and with 3.2 seconds left of the championship trophy, he couldn’t hold back the tears. Curry is a man who has seen the big picture, this is not the first time he has won a championship, but he still cried.

Because this time, it’s more difficult. After missing the playoffs for two seasons, the Warriors re-entered the playoffs and reached the highest stage.

Curry is 34 years old, and young people such as Poole and Cuminga have also joined to help him win the championship. With 3.2 seconds left in the game, the outcome was decided. Curry couldn’t help shedding tears. He bent down at one point, not wanting to be caught by the camera. After the game, teammates surrounded Curry to celebrate with him.

While congratulating one after another, netizens also posted that they were moved by Curry’s spirit and hoped that he would be healthy. That’s how he continued to play, and dedicated more exciting games to everyone. Come on. 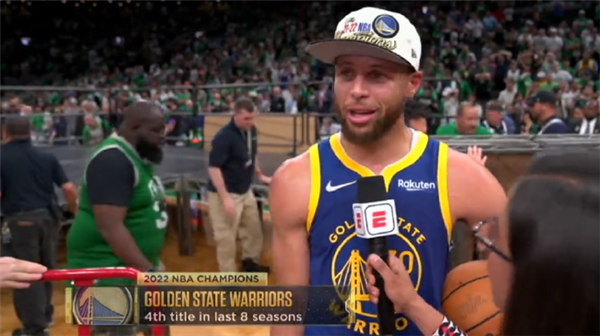