In Skull and Bones, the naval battles will be strategic: you will have to choose your weapons and ammunition, prepare your defenses, know how to choose your bonuses and penalties, motivate your crew or even exploit the environment to win.

In Skull and Bones, the player embodies a pirate in search of glory and wealth, a substantial part of the gameplay is clearly based on the maritime dimension of the game: managing and improving his ship, exploring the oceans and fighting in naval battles. In view of the latest post published on the official blogwe understand that these naval battles will be strategic and that in combat, the ships have strengths and weaknesses which must more or less be apprehended like those of an RPG character.

The choice of weapons. In concrete terms, as noted above, ships can board various kinds of weapons and be equipped with various armors. Certain weapons will be more effective against certain armor (Greek fire against a metal ship for example to inflict additional fire damage for example), when certain armor will resist certain weapons better (metal is strong enough to resist projectiles blunt for example). Captains will have to study their target and adapt their assaults accordingly. Armor and armor can also be upgraded: the higher level a weapon is, the more damage it will inflict.

Target a weak point. At the same time, the ships of Skull and Bones have also a weak point “ visible in red on the screen: successfully targeting this weak point will undoubtedly be difficult in a naval battle between moving ships, but will allow you to inflict heavy damage.

Take advantage of bonus or malus effects. The developer also specifies that a naval battle is preparing, in particular thanks to to “effects”. Captains can unlock buffs before the fight to increase their effectiveness (for example with repair kits, by feeding his crew correctly in order to give him heart to work). Conversely, negative “effects” can be inflicted on enemy ships, some with immediate effects, others producing lasting effects over time. For example, a fire on a ship will quickly produce great damage, while tearing open the hull to generate a flood will produce mild effects but can have devastating consequences if the damage is not repaired. Similarly, piercing enemy sails does no damage but immobilizes the ship (some ammunition is designed to dislocate enemy sails). Here again, the captains will have to be proactive in order to prepare and adapt their strategy.

Motivate your crew. The crew could also be decisive. In combat, the crew’s “morale bar” becomes a “fury bar” which increases with each successful maneuver. Once sufficiently full, it allows a boarding maneuver against the enemy crew: a powerful attack, allowing to loot the enemy’s loot, or even to sink the ship from the inside, but which supposes approaching the enemy ship and therefore to expose themselves to a counterattack. 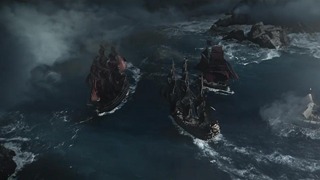 Maneuver and exploit the environment. However, if the equipment and the crew are important data in combat, maneuver your ship efficiently so is it. According to the development team, a small fast ship will be able to overwhelm a much larger and better armed but much slower ship, having difficulty maneuvering and positioning itself to hit its target. Similarly, captains could be well advised to exploit the environment to their advantage: locate shoals, islands, exits allowing them to get out of a fight that would go wrong or retreat to better regroup with his allies.

The loot. Finally, if naval battles can lead to the sinking of the adversary, it is clearly depriving oneself of at least part of its cargo (of loot). As long as they have a full “fury bar”, players in search of riches may prefer to attempt to board a ship in bad shape in order to plunder its hold. It is more risky, but also more profitable.