Bandai-Namco announces that since its launch in 2018, more than 10 million accounts have been created on Naruto To Boruto: Shinobi Striker. This information is accompanied by another news for the fans. Indeed, the 5th Season Pass entitled “Heritage” will arrive shortly.

Throughout 2022, players will be able to welcome five new ninjas. These will join the twenty characters already present. We can also imagine that one of the silhouettes appearing at 39 seconds of the trailer below and carrying a sword is that of Kisame. Indeed, few protagonists in the manga use such imposing swords. In addition, the characteristic shape evokes that of the famous Peau-De-Requin weapon.

From the summer, we will have to expect a rebalancing of the characters as well as graphic and structural changes to the land, particularly in the village of Konoha. We can also discover the introduction of a “chakra jump”. In the video, we notice that the characters can with this one jump several meters in order to reach the top of the buildings. Mastering this technique will allow you to navigate the environment more easily. However, it is still early to measure its effectiveness in full combat.

Here is in detail the program of adjustments planned until the end of the year: 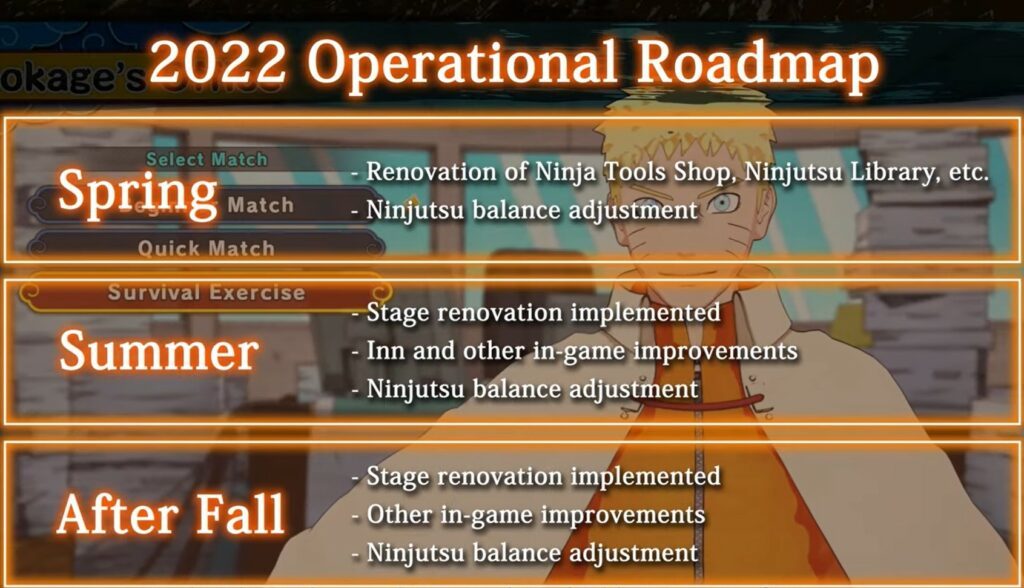 In addition, the publisher announces its firmness with regard to harmful behavior. Sanctions going as far as the suspension of accounts will henceforth be taken against cheaters.

Naruto to Boruto: Shinobi Striker is available on PlayStation 4, Xbox One and PC.