“Never again EA Sports FIFA!” Electronic Arts dropped this bombshell last Tuesday and caused a mighty stir in the sports game world! Rumors that the eponymous world football association and the game manufacturer would part ways sooner or later have been circulating since last year. It was not until October 2021 that various reports appeared that EA wanted to continue without the FIFA branding in the future. The costs are too high, the benefits too low. “We can’t get more than four letters on the cover,” company boss Andrew Wilson reportedly said in a meeting. The license has always become more of a curse than a blessing.

That the efforts to find a compromise between the two parties have now really failed comes as a bit of a surprise. Because it not only means the end of a well-known series of games, but also the end of an incredibly successful cooperation that ran for almost three decades – and brought in a lot of money for both sides. EA Sports is said to have earned over $20 billion from the series over the past 20 years, and the world association collects $150 million in license fees annually. Nevertheless, the final end followed.

08:07
EA Sports FC instead of FIFA – Nothing changes for us players | column

The current deal has been extended again until the summer of next year to include the World Cup in Qatar and the Women’s World Cup in Australia. At least FIFA 23 will be released as usual this fall. After that, however, the franchise will continue under the name EA Sports FC, while FIFA itself wants to do its own thing. So both sides are facing an enormous upheaval and things will change for the players as well. At least that’s how it seems. However, I am of the relatively firm conviction: Not much will really happen in the virtual soccer world!


The cooperation between EA and FIFA started in 1994 with International Soccer. 28 years later it’s over now.

Of course, one can argue that the loss of the “FIFA” name is pretty serious for EA Sports. After all, the brand is one of the biggest in the gaming, if not the entire media industry. If you google FIFA, the game will be suggested first and then the world governing body. By renaming you risk a lot of recognition value. And yes, there will definitely be one or the other occasional player who only buys a new football game every three years, who will then stand in front of the shelf in amazement and ask themselves: where has FIFA gone now? But that will most likely not really hurt the image and sales. We’re not in a situation like Facebook, which lost $500 billion after its meta rebrand.

Most of the nine million players who played FIFA 22 last year (buy now €25.22) who have invested thousands of euros in microtransactions, the name change will not matter – as long as the presentation, gameplay and content are right. The hardcore gamers don’t suddenly migrate to Konami. They continue to access EA, because that’s the only way to maybe draw Pelé from a pack of cards.

And that will definitely remain the case, because after all the basic structure of the game will not be shaken. “Everything you love about our games will be part of EA SPORTS FC,” said Cam Weber, general manager of EA SPORTS, in an official statement. “Same great experiences, modes, leagues, tournaments, […] Ultimate Team, Career Mode, Pro Clubs and VOLTA Football will all be included.” 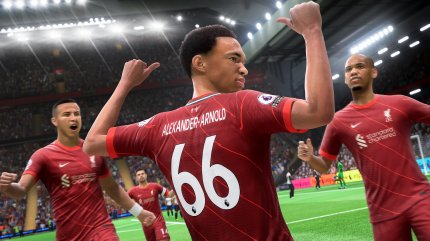 It’s in the Game: Liverpool FC and the rest of the Premier League continue to feature exclusively in Electronic Arts games.

The licenses also remain largely untouched. Existing agreements with clubs, leagues and other partners still apply. Paris Saint-Germain, Liverpool FC and Real Madrid have already sworn their loyalty to EA in public. The company continues to hold the exclusive rights to the English Premier League and the German Bundesliga. And UEFA and FIFPRO are also still on board – and thus more than 19,000 players, 700 clubs and 100 stadiums. The only notable loss is that EA will no longer be allowed to add a soccer World Cup to the game in the future. But you can probably screw that up.

So you can go so far as to say in the old Raider Twix manner: FIFA is now called EA Sports FC, otherwise nothing will change. It would also be naïve to think that the rebranding would result in any game design revolution. Even if EA sells it completely differently, of course.

“A new era begins in July 2023,” headlines Electronic Arts, for example, on its own website. Independence from world football’s governing body would offer completely new opportunities in terms of innovation and creativity. EA SPORTS FC would be a symbol of change. Greatest marketing crap. Whoever believes it will be saved.

The developers would be pretty stupid to adjust even a little thing on their cash cow and scare the players away. “Never change a running system” and such. And just because you’re supposed to have more freedom in the future doesn’t mean you’re reinventing the gameplay from scratch, revamping the career mode, or going less pay-to-win. On the contrary: It is quite possible that in the future only more ways will be found to somehow squeeze money out of the game – for example through Fortnite-like live events, which according to EA Sports Vice President David Jackson will be part of the “entertainment” experience must. Or through lucrative advertising deals with ticket and jersey sellers or betting providers. A cooperation between EA and Nike was only announced on Tuesday. That wasn’t possible until now because FIFA has a contract with adidas.

No competition from FIFA

But wait, one can now say: If FIFA soon develops its own football game, could it not force EA to put a little more effort into its own titles? And yes, it’s also absolutely true that we could use a little more competition in the genre right now. Electronic Arts has been building a beautiful monopoly lately, so maybe another rival would stir things up in the market. After all, apart from a few gameplay scenes at last year’s Gamescom, UFL hasn’t been seen at all. No idea whether the free-to-play kick based on the Unreal engine will ever really be able to keep up with the top dog. And eFootball. Well, let’s put it this way: despite the meanwhile acceptable 1.0 version, they should rather continue to work on getting their own game to run properly and hand in the promised content. 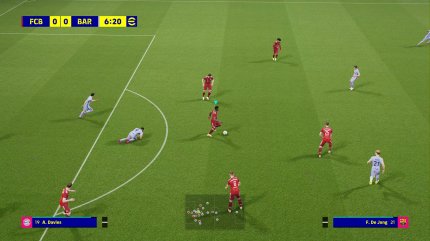 Konami couldn’t keep up with EA Sports this year. Will FIFA do better in the future?

But is FIFA really capable of putting on a competitive game? I’m very skeptical about that. The plans of the world soccer association only sound partially convincing: They want to publish soccer video games with external publishers around the next big tournaments. Some less simulation-heavy titles are already planned for the third quarter of this year. For 2024, they will then work with leading companies and investors to develop a new big game. “I can assure you that the only authentic, real game to bear the FIFA name will be the best available for gamers and football fans,” said FIFA President Gianni Infantino on the FIFA website. To me it sounds a bit like “Then let’s build our own football game, but with blackjack and hookers”.

Who is supposed to implement this? 2K Sports? Your own development studio? And what is that supposed to look like if you have nothing but a big name: neither licenses nor technical know-how? To believe that a serious alternative could arise here for everyone who is no longer in the mood for EA Sports: that’s illusory. From a club that allegedly demands 300 million for its license alone, that wants to hold World Cups every two years and has sold a tournament to Qatar out of sheer corruption – I don’t expect a game from them that I’ll end up enjoying.

Jump to the comments (0)