New 13″ MacBook Pro with faster M2 chip will be released this Friday. Several YouTube channels and media outlets have already shared early reviews of the laptop, talking about performance improvements and other changes. The only notable change to the 13-inch MacBook Pro is the M2 chip with an 8-core CPU and 10-core GPU. Apple claimed that the M2 chip’s CPU is 18% faster, the GPU up to 35% faster, and the Neural Engine up to 40% faster than the M1 chip. The new 13-inch MacBook Pro has the same design as the previous model, including the Touch Bar and two Thunderbolt 3 ports on the left side of the laptop.

The headphone jack on the new 13-inch MacBook Pro also received support for high-impedance headphones, the same as the 14- and 16-inch models.

The 13-inch MacBook Pro M2 can be equipped with unified memory up to 24 GB, while the M1 chip supports a maximum of 16 GB of memory. Like its predecessor, the MacBook Pro M2 supports up to 2TB SSD storage.

Prices for the 13-inch MacBook Pro in the US start at $1299. The updated MacBook is available in space gray and silver.

Many reviewers agree that it might be worth waiting for the updated MacBook Air with the M2 chip, which Apple says will be available in July. The new MacBook Air costs $1,199 and features a new design, MagSafe charging, a 1080p camera, thinner display bezels, and more.

If you just need a good new laptop, wait for the upcoming MacBook Air. You’ll get a bit bigger, a more modern screen, a better webcam, nicer speakers, and fast charging support, all in an overall lighter package (and fun colors!).

Viewed in a vacuum, the MacBook Pro 13 is a great laptop with outstanding performance and unrivaled battery life, characteristics that put it ahead of some PC competitors. This entry-level Pro’s most direct competitor is not the more premium versions (14- and 16-inch MacBook Pros), but the MacBook Air. The Air not only has a lower starting price, but it also has a bigger display, better webcam, four speakers, more interesting color options, and a thinner body.

Monica Chin from The Verge:

It would be the perfect device if not for the new MacBook Air. The new MacBook Air, also equipped with the M2, is coming soon. Based on Apple’s website, this will be the same price as the M2 MacBook Pro for the same specs in most cases ($1499). But unlike the MacBook Pro, the M2 MacBook Air does get a big redesign, and it includes new features, new colors, a larger display, a 1080p webcam, and especially MagSafe that this device doesn’t have. 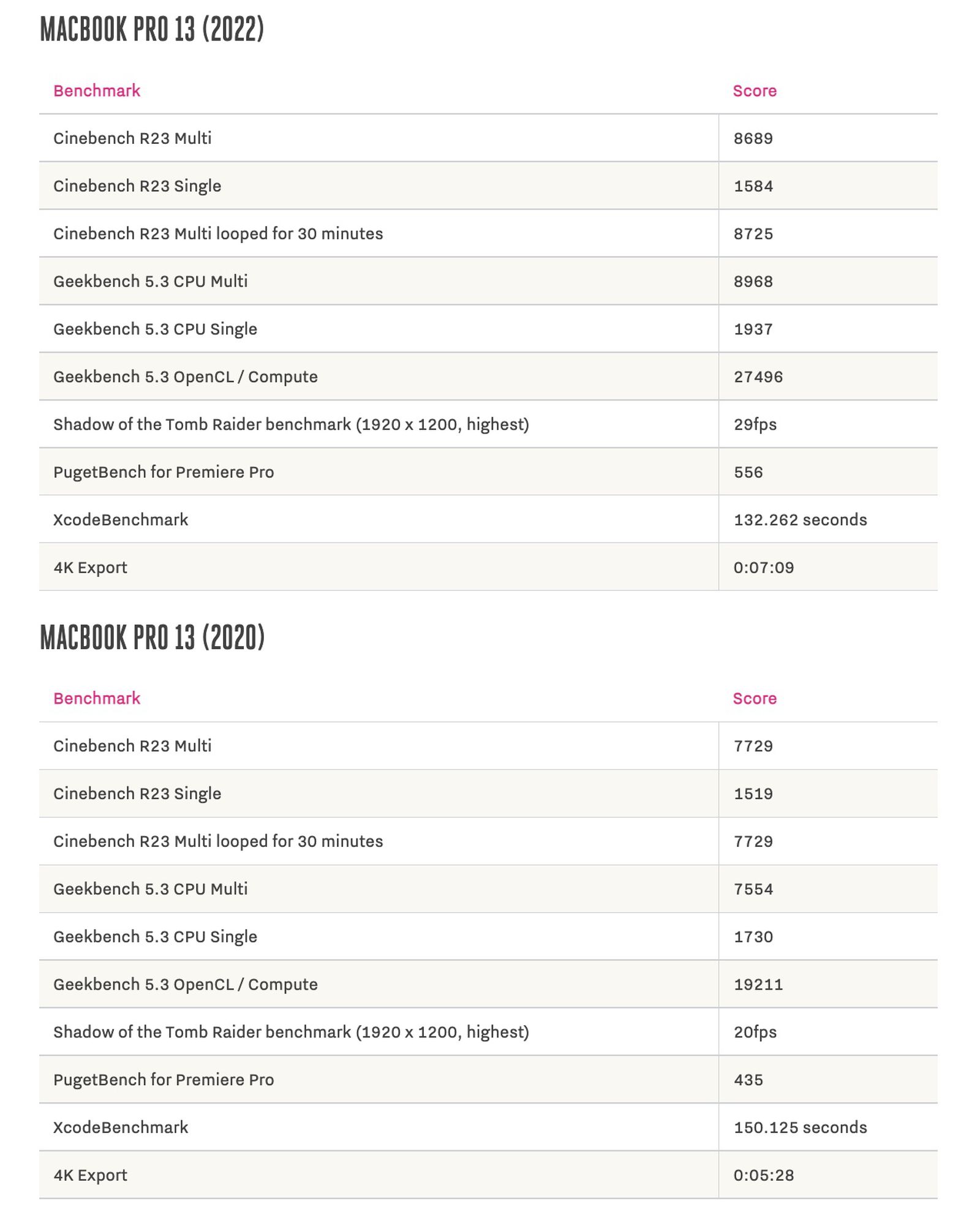 Remarkably, our battery test beat the promised 20 hours of video playback that Apple promised. In our testing of the MacBook Pro M2, 4K video played for 23 hours and 15 minutes. During playback, I also set the brightness to 50% and disabled all devices and interfaces. It’s pretty impressive, in everyday use it’s hard to get a MacBook Pro to turn off.

I could easily extend the use of the 13″ MacBook Pro to a full day, about 18 hours of full use, the laptop can be idle for several days.