In our speech there are many words that allow us to vividly convey the thought and mood. But we do not know the exact meaning of such words, especially since they often have a foreign origin. When we hear the phrase “not comme il faut”, we understand its meaning: it doesn’t fit, it’s not convenient, we don’t want to. But where did this word come from in our language and what exactly does it mean?

♥ BY TOPIC: 1 barrel is how many liters?

What does the word “comme il faut” mean and how did it appear?

The word itself is actually a whole phrase in French. There “comme il faut” means “as it should”, “as it should” or “properly”. The stress in this phrase is placed on the last syllable, as is customary in French. The phrase became popular even in the pre-revolutionary bourgeois environment, describing well-mannered people who comply with the rules of decency. In a general sense, the concept implies a good tone, established standards of behavior. They said: “You are not comme il faut enough” or “you have to be comme il faut here.”

And in the Russian language, the word appeared not by chance. Among the domestic nobility, it was considered natural to know the French language and communicate in it. One can recall at least Leo Tolstoy and his “War and Peace” with numerous inserts of a foreign language.

Only, please, buy yourself another hat … You have to be comme il faut here.
Chekhov A. P., Ariadne, 1895

Gradually, stable phrases and convenient expressions penetrated into our French language, one of which was “comme il faut”. The higher environment also had its own rules of conduct, which indicated the limits of what was permissible (the same comme il faut) and not quite possible (not comme il faut). In modern language, the word is usually used with a negative particle, taking on a meaning that is understandable to everyone. 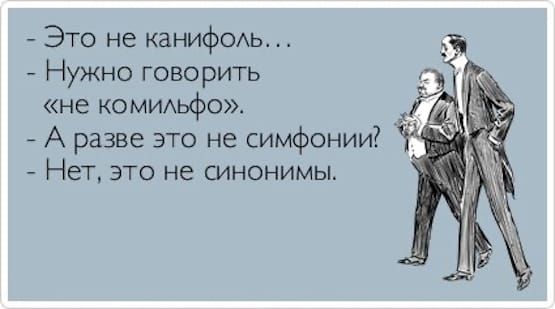